By Dale C. Van Demark and Abby Higgins on Jan 24, 2023
Posted In Telehealth

Trending in Telehealth is a new weekly series from the McDermott Digital Health team where we highlight state legislative and regulatory developments that impact the healthcare providers, telehealth and digital health companies, pharmacists, and technology companies that deliver and facilitate the delivery of virtual care.

END_OF_DOCUMENT_TOKEN_TO_BE_REPLACED

By Amanda Enyeart and Abby Higgins on Jan 19, 2023
Posted In Telehealth

Trending in Telehealth is a new weekly series from the McDermott Digital Health team where we track telehealth regulatory and legislative activity. Each week we will highlight developments that impact the healthcare providers, telehealth and digital health companies, pharmacists, and technology companies that deliver and facilitate the delivery of virtual care.

END_OF_DOCUMENT_TOKEN_TO_BE_REPLACED

By Amanda Enyeart and Abby Higgins on Jan 19, 2023
Posted In

Trending in Telehealth is a new weekly series from the McDermott Digital Health team where we track telehealth regulatory and legislative activity. Each week we will highlight developments that impact the healthcare providers, telehealth and digital health companies, pharmacists, and technology companies that deliver and facilitate the delivery of virtual care.

END_OF_DOCUMENT_TOKEN_TO_BE_REPLACED

Staying Connected: An Update on Medicare Reimbursement for Telehealth Services After the PHE

In hopes that the COVID-19 public health emergency (PHE) will soon end, Congress and the administration are evaluating the telehealth expansions and flexibilities put in place to respond to the PHE. As a result, the future for telehealth stakeholders remains uncertain. This article outlines various changes in Medicare telehealth reimbursement policy in effect during the PHE and identifies what actions would be required to make these changes permanent.

Since the implementation of the PHE, there has been a significant uptick in the provision of telehealth services by Medicare, other public payers and commercial payers. In response to this increased utilization and outreach by stakeholders, Congress has actively explored ways to make some, or all, of the PHE flexibilities permanent.

The pathways to making telehealth flexibilities permanent, however, are neither simple nor clear. Reimbursement for telehealth services is governed by complex statutory, regulatory and subregulatory requirements at the state and federal level. At the federal level, the PHE-driven changes have come via both federal legislation and regulatory modifications. This article describes what steps would be necessary to make federal telehealth reimbursement policy changes permanent as the healthcare system recovers and rebuilds from the COVID-19 pandemic.

Top Takeaways | Cybersecurity & Insurance Coverage in the Age of Telehealth: Understanding and Mitigating Your Risk

With more frequent and more severe ransomware attacks against health care platforms and vendors and the increasing use of telemedicine, it is critical to understand how to proactively defend your organization using robust legal, regulatory and cyber-coverage strategies. In this webinar, McDermott partners Dale Van Demark and Edward Zacharias joined Brett Buchanan of Marsh & McLennan Agency and Larry Hansard of Gallagher USA to explore the intersection of telemedicine and cybersecurity. Our panelists offered attendees a road map for navigating this rapidly changing space, including practical strategies for shoring up their defenses and addressing potential risks to their businesses.

Telehealth and Prescribing: What’s Permissible in Your State?

By McDermott Will & Emery on Mar 2, 2021
Posted In Telehealth

Telehealth’s state-by-state regulatory patchwork means that healthcare providers must navigate a variety of regulations that govern which types of care can be provided by virtual means, and even what modalities can be used in different care settings.

Our new interactive map explores the standards and requirements that physicians and nurse practitioners must follow when prescribing non-controlled substances or ordering tests via a telemedicine encounter in all 50 states and the District of Columbia. Key issues addressed in the survey include:

In a fourth amendment to the March 17, 2020, Public Readiness and Emergency Preparedness Act (PREP Act), the US Department of Health and Human Services (HHS) has expanded access to COVID-19 Covered Countermeasures through telehealth and clarified the scope of liability protections provided by the PREP Act. In particular, the declaration is important to telehealth providers because it appears to preempt, under certain circumstances, state laws that have limited cross-border practice of medicine using telehealth. Healthcare providers should take note that the licensure exception and any immunity protections are limited to healthcare providers who are ordering or administering a Covered Countermeasure and there is no indication of intent to expand beyond these focused measures.

The US Department of Justice and the US Department of Health and Human Services Office of Inspector General recently announced a significant healthcare fraud takedown involving $4.5 billion in allegedly false and fraudulent claims involving telehealth. The allegations involved telehealth executives paying healthcare providers to order unnecessary items and services, as well as payments from durable medical equipment companies, laboratories and pharmacies for those orders. While the alleged conduct is not representative of the legitimate and crucial telehealth services offered by the vast majority of healthcare providers, the government’s continued focus on telehealth arrangements, combined with the ongoing expansion of coverage for telehealth services, provides an important opportunity for healthcare providers to evaluate their telehealth service offerings and arrangements and to further enhance their related compliance activities.

On September 30, 2020, the US Department of Justice (DOJ) issued a press release describing the largest national healthcare fraud and opioid enforcement action in the DOJ’s history (the Takedown). The Takedown involved coordination with the US Department of Health and Human Services Office of Inspector General (OIG) and other federal and state law enforcement agencies, and resulted in cases against more than 345 defendants in 51 judicial districts. The government charged the defendants with participating in healthcare fraud schemes involving more than $6 billion in alleged losses to federal health care programs, with the vast majority of alleged losses ($4.5 billion) stemming from arrangements involving alleged “telefraud.”

Many of the cases involved telehealth executives who allegedly paid healthcare providers to order unnecessary durable medical equipment (DME), genetic and other diagnostic testing, and medications, either without any patient interaction or with only a brief phone call. The government alleged that the arrangements involved kickbacks to telehealth executives after the DME company, laboratory or pharmacy billed Medicare or Medicaid for items and services that the government asserts were often not provided to beneficiaries or were “worthless to patients . . . and delayed their chance to seek appropriate treatment for medical complaints.”

A bipartisan pair of US senators have proposed legislation that would allow certain controlled substances to be prescribed via an initial telehealth encounter and—under certain conditions—expand Medicare reimbursement of audio-only substance use disorder treatment services. The proposed TREATS Act has been referred to the Senate Committee on Health, Education, Labor, and Pensions, and could significantly reduce the regulatory burdens associated with the remote prescribing of controlled substances.

For more than a decade, healthcare providers in the United States have been largely prohibited from prescribing controlled substances via telehealth without having previously performed an in-person medical evaluation of the patient. Although Congress created the framework for a “special registration” pathway that has the potential to more broadly permit the practice, the Drug Enforcement Administration (DEA) has not issued regulations to implement it. This has been a significant roadblock for the treatment of substance use disorder, which is often treated with controlled substances. Recently, Senators Rob Portman (R-OH) and Sheldon Whitehouse (D-RI) proposed the Telehealth Response for E-prescribing Addiction Therapy Services Act (the TREATS Act), which would allow certain controlled substances to be prescribed via telehealth. The TREATS Act also proposes to expand Medicare reimbursement of audio-only substance use disorder treatment services, if certain conditions are met. The TREATS Act was introduced on June 30, 2020, and has been referred to the Committee on Health, Education, Labor, and Pensions.

The remote prescribing of controlled substances has been stymied by the Ryan Haight Online Pharmacy Consumer Protection Act of 2008 (the Ryan Haight Act), which typically requires providers to perform an in-person medical evaluation of the patient prior to prescribing controlled substances. The Ryan Haight Act does incorporate seven pathways by which practitioners can prescribe controlled substances via telemedicine without a prior in-person examination, but these exceptions are extremely narrow and it is difficult for most providers to meet their requirements. One of the pathways, however, called for a “special registration process” that had the potential to more broadly permit providers to prescribe controlled substances via telemedicine. Congress left the implementation of the special registration process up to the DEA—and the DEA never issued regulations to implement it. After ten years of silence, Congress again pushed the DEA to act, imposing a second deadline for the DEA to implement regulations regarding the special registration process by October 24, 2019, under the SUPPORT for Patients and Communities Act. While there were rumblings that the DEA was prepared to act in late 2019, it is still yet to issue a proposed rule regarding the special registration process.

As we explained in a prior On the Subject, the COVID-19 public health emergency ushered in a significant, albeit temporary, change to the Ryan Haight Act, permitting providers to prescribe controlled substances via telehealth without a prior in-person medical evaluation during the pendency of the public health emergency declared [...]

Around the Corner: The Future Of Telehealth After COVID-19

Prior to the pandemic, health providers and stakeholders were quickly moving to develop and expand existing telehealth programs. Now we are seeing an adoption of telehealth solutions that far surpasses all of the activity we saw in the past five years combined.

Joined by leaders from BDO, Babylon Health, Crossover Health and the Illinois Bone & Joint Institute, we discussed what the future of digital provider/patient engagement may look like after COVID-19 and the legal factors that influence implementation. Telehealth is the new normal and there is no turning back. 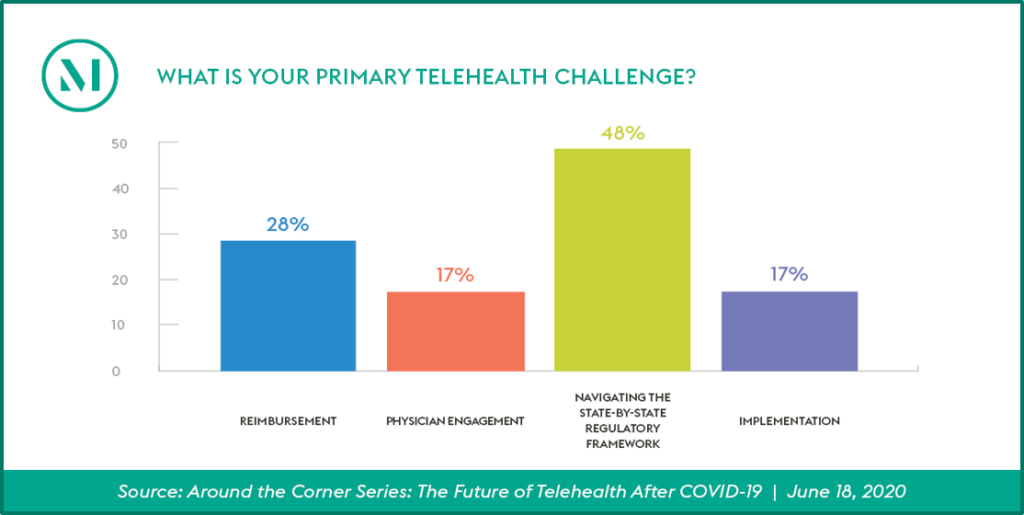 For a deeper dive into these topics, please listen to our webinar recording, available here.